Top 8 Facts About The Swedish Krona

1. Sweden uses the Swedish Krona as its legal tender.

3. The symbol that represents it is kr, and its official code is SEK.

4. The word "Krona" means "crown" in the Swedish language. This is why the currency is also referred to as the Swedish Crown.

5. Apart from that, Krona has several other nicknames like span, Lax/lakan/lok, riksdaler, pix, roding, bagis and crowns.

6. The government has introduced "e-krona", which the Swedish people are already using via an App. It is expected that it will completely replace the use of Swedish Krona banknotes in future.

7. In 1873 it replaced riksdaler riksmynt as the Scandinavian Monetary Union was formed.

8. As of now, it is speculated that the Swedish Krona will get replaced by Euro as Sweden is now a member of the EU. However, the majority of Swedish people are not in favour of doing so.

What is the interbank exchange rate for the Swedish Krona ? 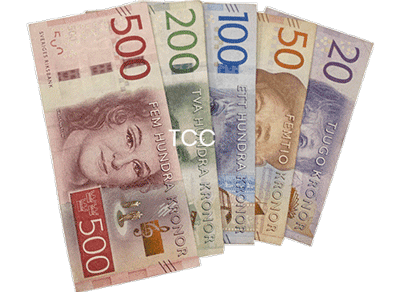