1.The history of Turkish currency Lira is divided into two periods. The first Turkish Lira period dates back to the period between 1923 to 2005, during which it was pegged to French franc, British pound, and U.S. dollar.

2. However, following rampant inflation in 2005, the currency was revaluated, marking the beginning of the 2nd Turkish Lira. During this revaluation, the Grand National Assembly of Turkey passed a law that allowed redenomination by removing 6 zeros which lead to a new currency- Turkish New Lira (TRY).

3. In 2009, the "new" marking was removed from 2nd Turkish Lira, and the currency's official name became the "Turkish Lira" again.

4. The Central Bank of the Republic of Turkey is responsible for the production of the Turkish Lira banknotes.

6. New Turkish Lira banknotes are produced in different sizes to prevent forgery. Also, banknotes of each denomination depict portraits of the famous Turkish personality Mustafa Kemal AtatĂĽrk rather than any geographical places or architectural sites.

7. TRY is, at times, ranked as one of the least valuable currencies worldwide. Moreover, as the country continues to suffer from inflation and stunted economic growth, TRY continues to face instability. In fact, as of May 2021, 1 Turkish Lira is approximately worth 12 cents in U.S. dollars. Therefore, 1 U.S. dollar is about 8.3 Lira.

What is the interbank exchange rate for the Turkish Lira ? 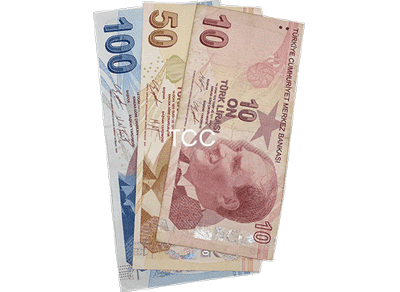